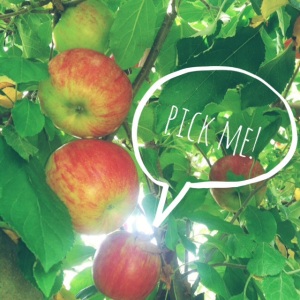 A few weeks ago I went apple picking for the first time. I should say the first successful time. Quick story. I tried to go apple picking a couple years ago with some friends. We found an orchard online and drove 45 minutes out of the city and into the part of suburbia that is still a little rural. We followed the directions and turned into the drive for the orchard only to see an incredibly dilapidated sign and NO TREES. That’s right, the trees had all been bulldozed, along with my dreams of endless apple baked goods. When we asked at the nearby pumpkin patch what happened to the orchard, a man informed us, “Oh well, Old Man McDonald died last year and they just decided to tear it all down.” DREAMS CRUSHED TWICE. THAT IS SO SAD.

We ended up driving to Whole Foods and spending way too much on organic apples and cider. I felt like I was in a sitcom. The TV Guide description would have read, “City girls try to do country thing, fail miserably.”

So anyway, this time was a much bigger success! Here are a couple things I made with the bounty:

Skillet Salty Caramel Apple Crisp from Tasty Kitchen.
A few notes: I don’t have a kitchen scale, and while I have weighed peaches before by standing on my scale with and without them, I chose to just wing it with the apples. I used these three semi-giant apples:

If you don’t have half-and-half at home (and don’t need it for your coffee), but do have milk, you can just use that. Also, I say use whatever apples you like. If I’d had Granny Smith, I would have used those because I like the tartness for baking, but Bon Appetit recommends a few others.

So, here’s the finished product:

Next up are PW’s Caramel Apple Sticky Buns. I love the Pioneer Woman because she’s funny, sassy, and she doesn’t try to make everything into its healthy counterpart. This lady is not afraid of butter. It also helps that she’s not a racist. Notes on this one: Her recipe is a double batch. I didn’t realize that when I started and even though I had enough ingredients for two pans of sticky buns, I didn’t need two pans of sticky buns, ya know? I’d also recommend using more apples than she used in the recipe, depending on the size, obviously. But I wanted the apples to have more of a spotlight than they got.

The secret to these buns is that you pour the caramel in the pan first, then the apples, then the buns. So, when you take the pan out of the oven, it looks like just some plain ol’ cinnamon rolls.

But the trick is to put a serving dish on top of the pan, then flip it over to get all the glorious caramel stickiness on top:

Confession: I don’t think it looks super appetizing this way! I also had light corn syrup and not dark, so that makes a difference in appearance. But don’t be fooled, these are delicious.

Now for the last treat (spoiler, no apples included): Caramel Corn! I love popcorn in all forms, but caramel corn is a great fall treat. This recipe makes quite a bit of popcorn, but it keeps well. So, here it is:

So, I say 8ish cups of popcorn because I rarely measure things. I pop the corn in my 8 quart stock pot and put in enough kernels to almost cover the bottom of the pot. Once popped, I’d guess it’s close to 8 cups. The good thing about making caramel corn is you can’t really mess it up, if you made too much caramel, just don’t use it all; if you need more, it’s easy enough to make quickly.

Alright, pop your corn and preheat the oven to 225ºF. In a pot, melt the butter and brown sugar over medium heat. Once melted, stir in the corn syrup and salt. Raise the heat and boil for 5 minutes, without stirring. 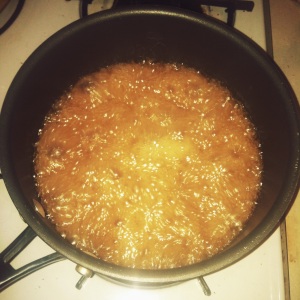 Remove from heat and add the vanilla and baking soda. Resist the urge to pour boiling sugary goodness straight in your mouth. Instead, pour the caramel over the popped corn and stir to coat evenly. Bake the corn in an oven-safe bowl (or two casserole dishes in my case) for 45 minutes, stirring every 15 minutes. Let the corn cool before eating. I prefer to pour it out onto parchment paper to cool so that I can break up the chunks. If you don’t mind the big chunks of caramel corn, let it cool in the bowl or baking dish.