IT’S FINALLY STARTING TO FEEL LIKE SPRING. I still had to scrape my windshield this morning, but it’s currently 62° and I WILL NOT be wearing a coat this evening. Take that, Mother Nature.

When spring finally starts to truly emerge, I always want something light and fun to listen to. Cue the folk pop tracks.

NPR has been streaming Nickel Creek‘s new album, so I’ve been getting my fill before it actually comes out. Really enjoying it, but I’ll save most of the Nickel Creek reviewing for after I see them in May (!!!). “Destination” is an early favorite, as well as their cover of “Hayloft”.

Mountain Man is this super folksy female trio. I’ve listened to them in the past and saw them a few years ago when they were touring with Feist as her backup singers. They wore these kinda crazy-looking long, drapey dresses and did weird hand dancing. But I liked them. So when I heard that one of the girls, Amelia, had teamed up with electronic producer, Nicholas Sanborn, I was pretty interested. Together they are Sylvan Esso and I’ve been playing these two songs on repeat lately:

The Columbus-based band Saintseneca seems perched to reach some significant indie attention levels. I’m happy to see them do well, having caught various stages of their growth. I wasn’t a big fan of Saintseneca when I first heard them four years ago. I really wanted to like them, but their sound wasn’t as dynamic then and their songs all seemed to merge together (in the bad way). NPR is also streaming their new album, Dark Arc, out tomorrow. Check out “Happy Alone”:

This last group isn’t a folk band, but they’re still providing a great soundtrack as spring tries to get sprung. A few weeks ago, I starred one of St. Paul and the Broken Bones‘s songs on a SXSW playlist, without really paying attention to who the group was. Then, as I was driving into work one morning, I heard an interview with the lead singer, Paul Janeway, and snippets of a few more tracks. I was hooked. These guys are from Alabama and make soul music that feeds my Motown-loving ears.

“Call Me” was the first song I heard.

“Broken Bones and Pocket Change” is a great example of what this band can do.

There aren’t any good videos of it, but “It’s Midnight” is a short, soulful track, and one of my favorites. St. Paul will be crooning away tomorrow night at Skully’s. I was really looking forward to seeing them at Rumba, knowing it would be an intimate show with a packed house (and cheaper beer). They quickly sold out tickets then moved the show to Skully’s to accommodate. Good for the band, a little sad for me.

As I said in my last post, I moved recently. It was initially a pretty awful situation. I’d been living in the same house for 3 years, with two roommates, and a terrible human for a landlord. Fortunately, I could look past the landlord and really liked where I lived. We knew the landlord was selling the house and that we’d have to move out, but were expecting that to happen in the spring or summer. BUT, being a terrible human, our landlord never kept us up-to-date on the timing. So on February 1, the new landlord sent us an email saying he had closed on the house and we had 30 days to GTFO. But he was really sorry and blah blah blah.

I was able to find a place (thanks Jackie!) in my same neighborhood. Actually, I only moved two blocks. Two blocks in the opposite direction than I would have liked, but I was in a bind. Overall, I like my place. Sure, I had to compromise on some parts because of the short notice, but I’m satisfied.

So, that’s the background info. Should also say that I’m no longer living with roommates. So far, I love living alone (I knew that I would). Now that I’m doing this new part of life, I want to document it. So I want to start a new column, like Music Mondays, devoted to living alone for the first time, and all the facets of that.

Aspects I hope to focus on:

Here’s where I need your help. I’m struggling to come up with a name for this column. I’m not sad about my situation and I don’t want some sappy title like SINGLE AND LOVING IT :)<3!!!!  or FLYING SOLO. Woof. I asked some friends for their input, and so far my favorite suggestion, from my friend Mal, is “All This Shit is Mine”. Unfortunately, that’s just too long. But it does reflect the attitude I have with this new phase: I’m a self-sustaining human and most of the time I really like my life.

Hopefully that gives you an idea. Feel free to comment with any suggestions you have. Looking forward to sharing life. 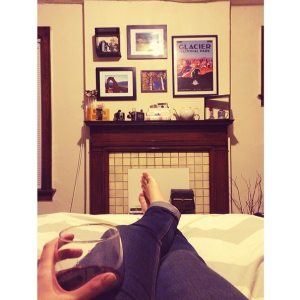 GUYS, IT’S 8PM AND NOT PITCH BLACK OUT. Let’s just rejoice in that quickly before moving on.

So I haven’t written in awhile, mostly because I moved recently and have been getting settled. But also because I wasn’t listening to anything I was overly excited about. But it’s time to get back into the swing of it, so here we go.

I’ve been listening to two albums on repeat lately. The first is Beck’s Morning Phase. I’ve always liked Beck, but never gave him a ton of attention in the past. That said, when an artist puts out an album after a significant period without one, I’m interested. (I know Beck released the sheet music in 2012, but that’s not a full studio album.) So I listened and liked it immediately.

It had been 6 years since Beck released his last album, Modern Guilt. During the hiatus, he had a serious back injury that prohibited him from playing guitar. Morning Phase isn’t a masterpiece 6 years in the making, or an epic redefining of an artist. But, it’s a really good, solid album.

By far, my favorite track is “Blue Moon”. The selfish, snobby part of me doesn’t want to admit that the first single from this album is my favorite, but it just is. I love when a song can trick you like “Blue Moon” does. If I’d listened to an instrumental version initially, I wouldn’t expect the sad, lonely lyrics. But it turns out to be a rather melancholy song. This balancing act of light, easy sounds with somber lyrics hooked me. Not to mention I’ll never say no to a steel guitar. Here’s the track:

The second album I’ve been listening to on repeat is Agnes Obel’s Aventine. This album came out in September, so I’m late to it, but just happy not to miss it. Obel is a Danish musician who makes beautiful music. “Dorian” is a lovely, haunting song, and my favorite track. Here’s a live version for you:

I don’t know if it’s just the Danish connection, but as I listen to this album I keep thinking she should do the score/soundtrack for a Lars von Trier film. Can’t you just picture his stirring storytelling accompanied by her looming sound?